US Prime: Plenty of Room to Grow
Even with AMZN shares up 32% year-to-date, we believe investors may still not fully appreciate the power of Amazon Prime. Our proprietary survey data shows that since 1Q13, Prime adoption has grown from ~18% of US households (USHH) to a current all-time high of ~47% in 2Q17, and is likely to surpass 50% penetration by year end, as Prime’s USHH penetration has risen 5% in 2H15 and 2H16 given seasonal and other factors (i.e. Prime Day). Prime’s growth should continue longer-term as AMZN’s US Prime remaining residential addressable market is ~58MM USHHs, of which about half of those households (~27MM) purchased goods on AMZN in May ’17, hence potential for conversion is fairly high.

Also we believe AMZN has a good opportunity to capture a significant amount of approximately 30MM US small and midsized businesses (SMBs) over time. As a proxy, we estimate COST has between 8-9MM business members in the US compared to 400K business customers for Amazon Business. Over time, we think Amazon Prime can continue to drive penetration of USHHs & SMBs given the high perceived value among consumers as AMZN continuously improves Prime’s value proposition. In our view, Prime will be the biggest driver of Amazon’s US GMV growth, which we estimate rising from ~$165BN in 2017 to ~$400BN in 2022.

The Warehouse Clubs have endured the opposite trends per our proprietary recurring monthly survey data from 1Q13-2Q17, as US Prime subs tripled since 1Q13, driving rising overlap with Warehouse clubs like Costco (COST $182, Outperform – Oliver Chen), as 64% of Costco members were also Prime subs in 2Q17 vs. 28% in 1Q13. Our data suggests dual member HHs (Prime + Costco) are visiting Costco stores less the past few quarters. Also Prime’s success has driven lower Costco-Only members, 8% of USHH respondents in 2Q17 vs. 14% in 1Q13, which is unlikely to improve over time. At the same time, our data suggests Prime-Only USHHs have risen dramatically, with penetration rising from 6% in 1Q13 to 19% in 2Q17, signaling a shift to Prime if consumers prefer one retail membership service, in our view. 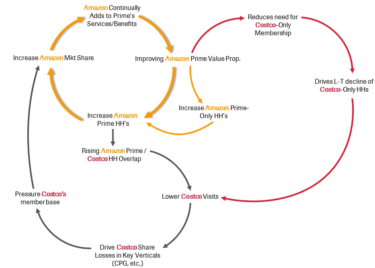 What’s At Stake – $150BN US TAM
Amazon is just scratching the surface in terms of the long term potential of the Prime platform, in our view. We estimate that Costco + Sam’s Club alone represent a ~$150B US opportunity, a TAM that Amazon (through Prime) is well-positioned to attack and take share over time. Also, if recent Warehouse club USHH membership penetration declines persist, we believe Amazon is the likely beneficiary.

Costco-Only USHH Members Amidst Long-Term Decline
An offshoot of Prime’s rise has been the decline of Costco-Only USHH members in our view, as 8% of respondents indicated they live in a Costco-Only HH in 2Q17 vs. 14% in 1Q13. It’s a similar story for Sam’s Club, 10% of HHs are Sam’s Club-Only members in 2Q17 vs. 19% in 1Q13. We do not envision this trend reversing as virtually all of the innovation sits with Amazon, which builds around a common principle, obsession with making its customers happy, and is largely not tied to physical constraints and/or singular purpose given the breadth of the Prime offering (retail, media, etc.). 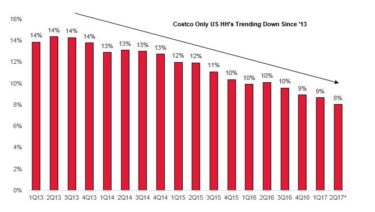 Exceptional growth of Amazon Prime in the US, especially the past two years, in which we estimate AMZN added an incremental ~10MM members each year, combined with stagnant growth to modest declines of members at Costco and Sam’s Club has resulted in significantly higher overlap among US HHs. 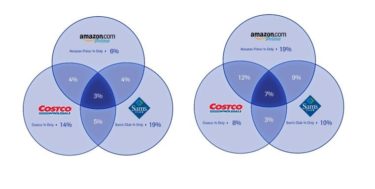 Amazon Prime has successfully infiltrated the member bases of Costco and Sam’s Club the past four+ years. According to our Survey, ~64% of Costco’s US members are also Prime members in 2Q17, more than double the percentage in 1Q13 of 28%.

% of COST Members that are also Prime Members 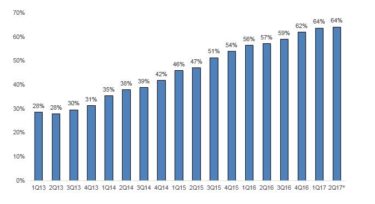 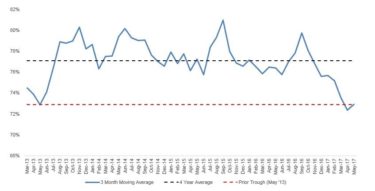 Overall US Costco Visitors Declined the Past 4 Months

While dual member trends seem to suggest intensifying competition between Amazon and Costco, our monthly visitor data for overall Costco members suggest negative trends are not only limited to dual members. In May ’17, the number of Costco members visiting a Costco store at least once during the month was down 9% y/y, the largest y/y decline ever captured by our survey. Furthermore, Costco member visitors declined y/y in four out of five months so far in ’17. Note, our survey data does not capture visitor frequency within any given month. 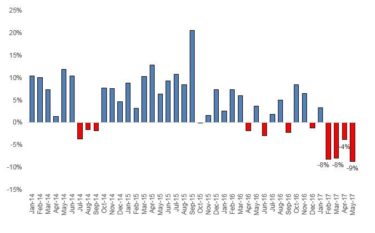 In CY 2Q17, the total number of respondents indicating they are Costco members is down ~5% y/y, down~4% sequentially, and it has declined for three consecutive quarters, falling ~7% since peaking in 3Q16, per our survey. All signs point to a declining US member base, which we believe is a non-consensus view. Furthermore, our survey suggests the number of US Members is similar to the 4Q15 level, despite Costco adding over 20+ US warehouses during that time.

Our data suggests AMZN’s Prime – Only USHHs have increased over 3x from 1Q13 through 2Q17, which we view as a positive indicator of the value prop that AMZN has established. Not surprisingly, younger cohorts are tracking above the overall penetration figure; A18-44 USHHs have 22-24% penetration rates among the Prime-only USHH subs. Meanwhile, Costco-Only USHH penetration has declined to 6-7% penetration of A18-44 USHHs in 2Q17 vs. 14-15% in 2Q13. 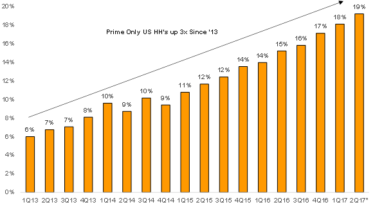 We analyzed the Prime, Costco and Sam’s USHH membership penetration based on 3 major demos (i) HH Income, (ii) Age, (iii) Geo (Urban, Suburban and Rural). Our data shows that Amazon has made significant gains across all age categories. Prime is attracting younger consumers at a faster rate than the Warehouse Clubs, all while tripling its penetration amongst the older demographics since 1Q13. Additionally, Prime penetration is much higher among respondents earning >$75,000 annually; however it has still made significant strides among those in the lower income bracket, and its new initiates to make the platform more affordable to lower income families should help to drive greater adoption. Finally, we can see Prime membership is broad based across all geographies with higher than anticipated penetration in suburban and rural settings.