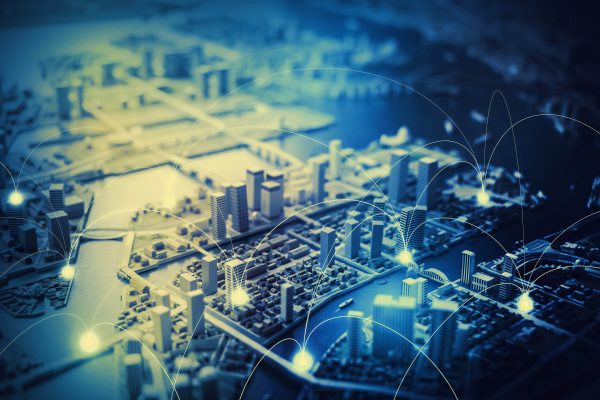 Cowen has created this comprehensive primer to address the growing smart city market and to assist investors in navigating its complex technologies and nascent applications. Our top ideas are SSNI, ITRI, XYL, and ROP with large multi-industry players like GE and HON offering exposure to the broader IoT market as it matures.

Multi-Year Urban Migration Driving Smart City Adoption
As the migration to urban centers accelerates, cities are increasingly looking to leverage communication and sensor technology to more efficiently use municipal-owned assets to combat rising pollution, crowded environments, and dwindling resources. The smart cities of the future represent fully integrated secure communications systems, capable of aggregating data, analyzing it, and acting upon those conclusions to the benefit of its populace. The actual “smart city TAM” is amorphous depending on what infrastructure is included, but growth rates tend to be in the mid-to high-teens range with some market estimates over $1 trillion. While cities like Buenos Aires, Singapore, NYC, Dubai, San Diego, and Copenhagen are all exploring specific initiatives, no one city has integrated all the benefits. Rather, specific applications are sought to address critical issues unique to each location.

Sensors And Software A Natural Extension For Metering-Centric Hardware Companies; Shift Leading To Elevated R&D And M&A
We see the smart city theme hitting an inflection point, as municipalities are beginning to utilize networks deployed initially for smart metering services. There is an opportunity to utilize deployed networks and meter data to provide utilities and municipalities with a variety of new services. Leveraging vast smart meter deployment, we are seeing traditional hardware and metering vendors reposition themselves through M&A and organic development as sensor and software companies. Itron’s recent acquisition of Comverge coupled with their Riva platform development as well as Silver Spring’s growth in SaaS revenue, now ~1/3 of revenue, exhibit this dynamic. In addition, we see synergies with GE’s Predix platform and Elster.

Streetlights Are A Natural Place To Start Building The Smart City Network
Given the rampant shift toward LED lighting adoption, we see street lights as a natural place to start the smart city build out. Streetlights are ideal given that they are typically a city owned asset, ubiquitous, and already connected to an electricity source. They collect and transmit information that help cities monitor and respond to any circumstance, from traffic and air quality to crowds and noise such as gun shots. Those very same networks can remotely control LED lights to turn on and off, flash, dim and more, offering cities a chance to maximize reduced energy benefits while improving pedestrian and bicyclist safety. This is critical as cities potentially move toward autonomous vehicles in the future. With street lights creating a network canopy, data can be used by more than just lighting departments, empowering even schools and businesses via a lighting infrastructure that leads to a truly intelligent digital city. In this note, we explore such applications, some of which that are gaining momentum today.

M&A Opportunities For Industrial Companies As Smart Cities Gain Traction
As cities continue to explore the benefits of smart city application we expect demand in the space to accelerate. As it stands now, smart cities represent the first real mainstream market in the nascent IoT revolution. As this market is further developed, we expect to see heightened M&A activity from many industrial companies as they all vie for exposure. Companies such as HON, ABB, and Siemens, in our opinion, stand as potential consolidators as these markets ultimately take shape. This Ahead of the Curve is designed not only to explain the various end markets, applications, benefits, and participants, but also to provide an outlook on how this market will develop over time. Ultimately, we believe smart cities will intersect with developments in smart grid, smart buildings, and the broader IoT market allowing for a highly automated and connected system that can collect, analyze, and act upon data collected across a broad array of sensors in real time.

The Tip Of The Smart City Spear; Top Ideas Working In The Market Today
While fully integrated smart cities are still in their relative infancy we wish to highlight several companies that are leading the way in key verticals and positioning themselves to capitalize on the growing demand for IoT solutions in urban centers.

Silver Spring Networks announced a bevy of smart city wins leveraging its IPv6 based mesh RF platform, which when coupled with Utility customers, should provide strong support into FY19. A growing Software/SaaS service should smooth revenues and improve margins over time.
Itron over the past several quarters has made meaningful moves to better address the smart city space. With an increasing focus on leveraging its Openway Riva platform and Comverge acquisition, the company is well positioned to leverage its big data capabilities. The company already boasts several smart city wins and is partnered with Cisco to expand its market presence.

Xylem’s $2bn acquisition of Sensus places it as one of the newer entrants into the smart city market. Xylem’s broad portfolio consists of both clean and wastewater infrastructure as well as municipal customers. Exposure to thematic trends in water conservation and measurement position Xylem well over the long term. The company should be able to capitalize not only on Industrial IoT applications, but also on full smart city deployments as city planners move towards more intelligent and connected systems.

Roper is exposed to the smart city theme through two of its businesses; Neptune and TransCore. Neptune operates in the AMI market, offering two way fixed network systems with data and analytics components. TransCore provides RFID, tolling, intelligent transportation, and freight matching services which all have applications in a smart city system. While Roper might not be first considered when playing the smart city theme, collectively, Neptune and TransCore account for 20% of total sales and each represent high quality business at the forefront of their respective fields.