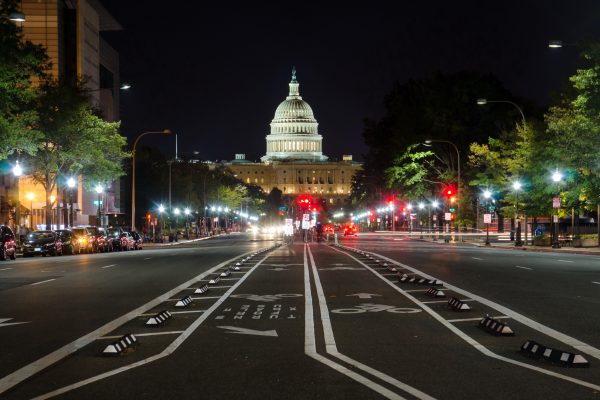 The Other One: Trump Regulatory Pendulum Shift, Volume 3 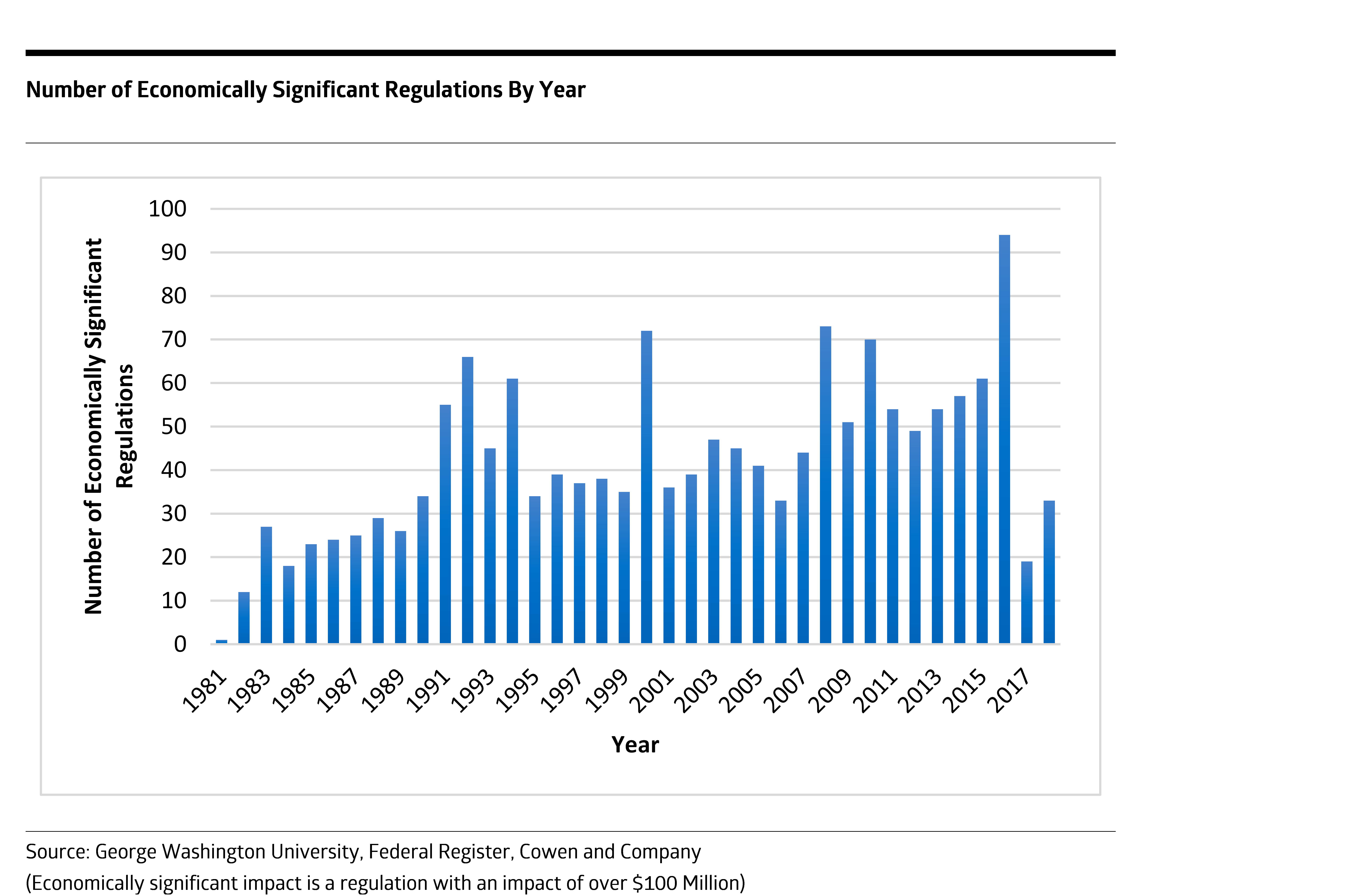 The Federal Register is the repository of all rules and regulations issued by the Federal Government and serves as a proxy for Big Government. ~26% drop in the number of pages published in the Federal Register between Obama’s final two years and Trump’s first two years. The difference between 2017 and 2018 was less than 10% (61,950 to 67,814). A slight uptick in 2018 though the numbers of pages published in 2018 is the second lowest (after 2017) since 2001.

Make Export Controls Great Again – Chris Krueger, Paul Gallant & Roman Schweizer
While tariffs and quotas have been getting all the attention, we continue to believe that export controls are an underappreciated trade tool this year. Last year, two bipartisan laws strengthened the foreign direct investment/M&A review process (CFIUS) and export controls on a wide-range of American high-tech. The devil is always in the details, which generally come from the regulators who interpret the legislation – the export controls regulations are expected this summer from the Commerce Department. The export control matrix needed a reboot before the U.S.-China decoupling began, though current tensions make this revision anything but routine.

The multi-stage process will result in two new classes of export controls: 1) “emerging” technologies (which will include China’s 2025 priorities), and; 2) “foundational” technologies (older technologies that weren’t constrained but maybe should have been). The scope of technologies under consideration for control is wide, touching on critical areas such as Artificial Intelligence (AI), advanced manufacturing, biotech, microprocessors, quantum computing, and 3-D printing. Other threshold considerations include determining criteria for defining such technologies and identifying the proper sources of information to conduct such analysis. While the Bureau of Industry and Security understands the commercial considerations, national security experts within the Department of Defense and National Security Council have been pressing hard to gain greater controls over critical technologies; this gets to the nature of “dual use” technologies that are available for both commercial and military use. With a pinch of hyperbole, this has the potential to create dozens of ZTE-type situations as global supply chains seize overnight.

Bottom Line: Markets can at least digest tariffs and model their impacts for companies and markets. Non-tariff trade barriers, export controls and investment restrictions represent a possible exogenous shock to global trade flows that are incredibly challenging to predict second and third level impacts.  BIS was closed during the 35-day shutdown. Along with a backlog and hundreds of public comments, the regulations roll out over the course of the year. A draft reg with the list of “foundational” technologies should come out in the May-June timeframe. Final regs on the “emerging” technologies should start rolling out in a piecemeal fashion in the fall. Final changes to the CFIUS process are due to be implemented by March 2020 but there are pilot programs covering various kinds of technology companies.

The following list is a sample of some of the companies have submitted comments on the draft lift of “emerging technologies”: Qualcomm, Facebook, Varian Medical Systems, Cirrus Logic, Alphabet, Pacific Biosciences, General Electric, Analog Devices, Raytheon, Illumina, and Splunk. Many other companies/organizations have posted comments as well including SIA, Volvo, Airbus, and Optical Society.

New Judges Likely to Protect Deregulation Agenda For Generations – Chris Krueger
The final arbiter of regulation (and legislation) is the federal courts. Trump’s legacy of remaking the judicial branch (2 Supreme Court Justices, 37 Circuit Judges and 56 District Judges) is about to go parabolic with another Senate rules change that lowered the debate time from 30 hours to 2 hours on District Court nominations, which will likely ensure Trump and the Senate GOP will confirm every vacancy in the next 18 months. There are 127 District Court vacancies, which Trump and the 53-47 Republican-controlled Senate will look to fill in the 571 days before the 2020 election. All of these federal judges have lifetime appointments.

There are currently 5 circuit judges and 55 district judges awaiting Senate action. There are another 3 circuit appellate vacancies and 72 district court vacancies. There are an additional 14 announced judicial vacancies that will occur before the end of Trump’s First Term (1 circuit and 13 district).

If Trump got all those confirmed, he would have 26% of circuit judges and 29% of district judges…in one term. Majority Leader McConnell’s priority in the first two years was the circuit judges – but now with the rules change, he can really run up the score on the lower district court. Many of Trump’s nominees are younger and more ideological – mainly because of the elimination of the 60-vote threshold that basically required bipartisan support for the lifetime job in 2013. Trump inherited so many vacancies largely because of the near two-year blockade in President Obama’s final two years by Senate Republicans. There is no question that Trump’s reshaping of the federal judiciary will be one of his most historic legacies – with the longest tail – that will help to protect his other legacy of deregulation.

Health Care: Drug Pricing “Blueprint” And Medicaid Top HHS Agenda; Deregulation Continues at FDA and CMS – Rick Weissenstein & Eric Assaraf
The Trump Administration’s drug pricing blueprint remains the highest profile regulatory item in health care with the International Price Index for Part B drugs and the Rebate Safe Harbor Rule for Part D drugs being the most noteworthy items. However, we continue to doubt that the drug pricing proposals will move forward on time and in their current form. We also expect the Administration will continue to utilize state waivers to shape the Medicaid program along with speedier device approvals at FDA and continued expansion of telemedicine reimbursement by CMS.

Banks Getting Regulatory Relief; Housing, Other Financial Firms Still Waiting – Jaret Seiberg
When it comes to financials and housing, Team Trump gets an incomplete grade as it steams through its final year before the election. It has made material progress in overhauling the post-crisis bank regulatory regime. Housing policy has changed little with FHA pricing the same, Fannie and Freddie still in conservatorship, and the Qualified Mortgage rule intact.

What this tells us is that the final 18 months of the President’s first term will see a much greater focus on housing policy. We already have evidence of this and expect to see more substantive proposals that could impact the mortgage market, mortgage insurers and home builders in the coming months.

TMT: Next 18 Months Riskier For Big Tech on Antitrust and Privacy – Paul Gallant
For Google/Facebook/Amazon/Apple, Trump’s first two years have been fine — lots of Tweets having zero policy impact. The next 18 months may be different. Two areas: 1) Privacy: We believe this FTC sees aggressive privacy regulation as harmful to innovation. Consequently, in the FTC’s upcoming consent decree rulings for Facebook and Google, we expect record-breaking fines but not fundamental new data-gathering limits on the dominant tech platforms. 2) Antitrust: This is the risk area for Big Tech. The FTC rarely pursues breakups or unwinds prior acquisitions. But the FTC’s new Tech Task Force was a signal that everything is now on the table for Facebook/Google/Apple/Amazon. So the next 18 months (pre-2020 election) are very important for tech at the FTC. Best outcome is modest changes like Google and Facebook have to share more data/revenue with publishers. Worst is some type of divestiture, like Facebook-Instagram, which we definitely don’t rule out.

For telecom, two main areas: 1) Broadband: Trump’s veto threat ensures Congress won’t undo cable/telcos’ major achievement at the FCC — broadband deregulation. But the House’s decision this week to hold firm on Title 2 as the basis for net neutrality rules keeps a lid on ISP happiness. It signals that a Democratic President in 2020 would almost certainly return implicit rate regulation risk to Comcast. Charter and Altice; 2) M&A: Trump hasn’t enabled the M&A free-for-all in telecom/media that many hoped for. We still think his DOJ/FCC will approve Sprint/T-Mobile, but state AGs are showing signs they could take the almost-unprecedented step of nonetheless challenging the deal. Congress did give state AGs power to block a deal even if it’s approved by DOJ/FCC. Nexstar-Tribune also seems to be in good shape, although DOJ’s new-ish focus on merged TV stations’ retrans power may be an underappreciated risk given Dish’s strong and well-argued objections.