COVID-19: Medical View from the Front Lines, Outlook for Vaccines and Drugs

Cowen hosted KOLs on the front lines of the COVID-19 response to discuss vaccine and drug development. Peak U.S. cases may approach 100,000 in the next month, especially as testing ramps up. Prospects are “not bad” for a vaccine within 18 months, and repurposed therapeutics show promise including Remdesivir (GILD), Actemra (RHHBY), and Kevzara (REGN/SNY). Remdesivir is in registrational trials.

Boston area hospitals have experienced a surge in admissions over the last week pertaining to COVID-19 “rule-outs”. At one hospital in which our consultant works, only a couple recent cases have been confirmed with a few additional patients strongly suspected to have the disease. Many diagnostic test results are pending at outside labs. Availability and turnaround time of testing remains the biggest challenge, although capacity is expected to increase “substantially” in the next couple of weeks. Logistical challenges including maintaining hospital staffing and access to medical supplies is not yet a major concern, but could become one.

As of now, the U.S. appears to be on the same trajectory as Italy in terms of viral transmission. The outbreak has been exacerbated by U.S. intervention efforts that “mostly missed the boat by about 3 weeks.” There is evidence now of community spread in multiple states across the country. Nationwide efforts related to social distancing, hygiene awareness, and travel restrictions (including today’s closing of the U.S./Canada border) should help to flatten the new case curve.

The Outlook Is Uncertain But Peak U.S. Cases May Approach 100,000

Our consultants estimate that the current number of reported U.S. cases (>6,500) will likely to rise over the next 2 months to match or exceed the peak numbers seen in China (>85,000). In both countries, there is evidence that undercounting of mild/asymptomatic cases means that the true number is potentially 5-10x the reported number. Peak cases in the U.S. should occur sometime in the next month.

If SARS-CoV-2 Immunity And Transmissibility Is Similar To Other Coronaviruses, COVID-19 Could Become An Endemic Seasonal Illness

SARS-CoV-2 comes from the same virus family as SARS, MERS, and the 4 major coronaviruses that cause the common cold. However, very little empirical information is available related to SARS-CoV-2 immunity and seasonality. It is far from certain, but higher temperatures and increased UV light exposure as we enter the summer months could blunt spread of the virus. The current rate of transmission (R0) is about 1:3 – this could drop below 1:2 over the summer. On the other hand, efficient transmission in warmer climates has already been documented and the virus could “surprise us.” If SARS-CoV-2 behaves similarly to other seasonal coronaviruses, then a moderate spiking of cases in the fall might be expected depending on levels of immunity within the community and the rate of antigen mutation. Whether SARS-CoV-2 will become endemic is very difficult to predict. Based on other coronaviruses, immunity after infection and recovery should last months to years, but there are exceptions. Circulating antibodies to MERS, for example, typically wane over the course of a year and in several instances have been observed to disappear within 2-3 months. Which scenario best applies to SARS-CoV-2 is not yet known, but rapid re-infection at this point seems unlikely. Even if antibody levels drop quickly, immune memory would likely be rapidly activated upon re-infection. Similar to SARS, certain regions of SARS CoV-2 are distinct, so a blood test for antibodies specific to the novel virus should be able to selectively identify COVID-19 patients with persistent immunity after recovery.

Prospects Are “Not Bad” For A Vaccine Within 18 Months

The NIH is fast-tracking two vaccine programs, one an mRNA-based vaccine from Moderna (mRNA-1273), the other a more traditional recombinant protein-based approach. Several other vaccine development efforts are underway in the U.S., Europe, and China. There are 3 issues that complicate rapid development of a successful vaccine.

As early clinical data are reported, serum levels of neutralizing antibody are a strong correlate to efficacy and should be a focus. In addition to these issues, past efforts at vaccine development for SARS, MERS, and the common cold suffered from lack of public and private resources as these viruses inflict relatively low disease burden. This is not likely to be the case for COVID-19 and our consultants believe that the prospects for a “pretty good” vaccine in the next 18 months are “not bad.”

The antimalarials chloroquine/hydroxychloroquine, the nucleotide analogue antiviral remdesivir (GILD), and the protease inhibitors ritonavir/lopinavir (ABBV) all hold promise for COVID-19 treatment but there are little controlled data and side effect profiles are far from benign. Anecdotal reports from France and China support the use of chloroquine/ hydroxychloroquine. Ritonavir/lopinavir is supported by anecdotal evidence as well, but our consultant noted the data were “shakier.” SARS and related viruses exhibit about 100-fold less sensitivity to protease inhibition than HIV and these drugs are highly protein bound making it difficult to reach efficacious exposures. Indeed, a randomized, controlled, open-label trial in China (n=199) was just published in NEJM showing no effect of ritonavir/lopinavir vs. standard of care. remdesivir is in randomized controlled trials (see below) and appears to be the treatment option of choice in the U.S. Other compelling agents include a nucleoside analogue out of Emory (EIDD 2801) and recombinant ACE2. Multiple other agents are under investigation (see table below) but it is too early to predict likelihood of success. Any successful agent is more likely to reduce disease severity than shorten the course of infection; the key will be in accessing robust early diagnostics to identify patients. Ideally, clinical or biomarker correlates to predict patients at greatest risk of acute respiratory distress syndrome (ARDS) would be vaildated and put into practice. Direct antiSARS-CoV-2 antibodies are perhaps less promising because, similar to influenza antibodies and neuramindase inhibitors, it is likely that administration after the ~4th day of infection may not be efficacious. Anti-IL-6 antibodies such as Actemra (RHHBY) and Kevzara (SNY/ REGN) appear to be helpful in preventing progression to ARDS in patients with severe symptoms, but these data too are anecdotal. Designing clinical trials across all therapeutics will be complicated by poor understanding of the SARS-CoV-2 clinical trajectory. 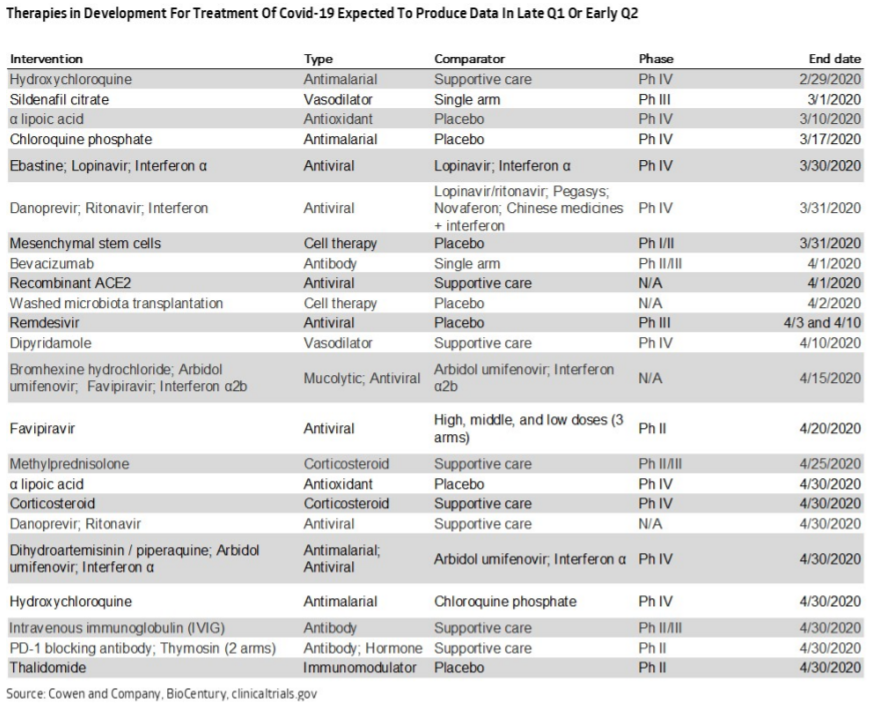 Gilead’s remdesivir (GS-5734) is a nucleotide analogue initially developed as a treatment for the Ebola and Marburg viruses. It was later shown to have activity against coronoaviruses such as MERS and SARS and more recently it was demonstrated to be effective against SARS-CoV-2 in preclinical experiments. Our consultants think that the preclinical data remdesivir has produced against SARS-CoV-2 are the strongest for any agent currently in clinical testing, though they acknowledge that the bar is low as most other agents have not demonstrated meaningful efficacy in preclinical models. Based on the preclinical data, our consultants are hopeful that remdesivir will be effective in clinical trials, and that it will be useful in lessening the severity of the disease. Nonetheless, without clinical data in COVID-19 they find it difficult to handicap its chances of success with any degree of precision.

Clinicaltrials.gov lists 5 ongoing clinical studies for remdesivir in the treatment of COVID-19, as well as an expanded access program. The first two Phase III trials of remdesivir are expected to complete in April 2020, and both of these are being conducted in China. One is a 453 patient trial in patients with Severe 2019-nCoV Respiratory Disease, and the other is in 308 patients with mild and moderate 2019-nCoV Respiratory Disease. The primary endpoint of both studies is time to clinical recovery (TTCR), which is defined as the time (in hours) from initiation of study treatment until normalization of fever, respiratory rate, oxygen saturation and alleviation of cough, sustained for at least 72 hours.

Our consultants think that TTCR is a reasonable composite endpoint for the studies, though they note that it can be somewhat intensive to measure correctly. In their opinion, a 1-day difference in TTCR would be clinically meaningful, and similar to the impact of neuraminidase inhibitors on influenza infections. The physicians would be more impressed by a two day or greater improvement in TTCR as this magnitude of benefit would likely lessen the burden on hospitals. The physicians would also be further persuaded if the TTCR improvements are corroborated by benefits on secondary endpoints speaking to disease severity.

In addition to the studies being conducted in China, clinicaltrials.gov lists two multinational Phase III trials enrolling 1,000 patients in total. Both trials are expected to complete in May 2020. Clinicaltrials.gov also lists a Phase II study (enrollment of 394 anticipated, to complete 2023) as well as an expanded access program. Our consultants are unsure of the size of the safety database that the FDA would require to support approval or Remdesivir, but think it likely a “few” thousand patients would be sufficient. The physicians suspect that the patient numbers in the Phase III trial (n-~1,760) combined with the likely patient experience from the expanded access program could be a sufficient safety database to support approval should the Phase III trials hit the efficacy endpoints.