As part of Cowen’s COVID-19 Virtual Conference Series, we hosted a call with Ishka’s Eddy Pieniazek, Head of Analytics & Advisory, and Siddharth Narkhede, Credit Risk Team Lead, who offered perspective on the current and future impact of COVID-19 on the airline and aircraft leasing industries.

The Virus is Transient, Some Impacts Are Not

The near-term pain is real, but the truth remains that COVID-19, like all stress scenarios, is transient. This too shall pass, and when it does the airline industry will fall back into long-term traffic and fleet growth trends. For now, worries surrounding delivery delays at Airbus and MAX RTS are pushed to the side as investors focus on the capability of each airline to survive a period of severely limited demand and how aircraft lessors will deal with the uncertainty surrounding aircraft valuation and repossessions.

Not all Airlines are Created Equal – Liquidity Remains a Concern

Airline liquidity has come under the microscope in recent weeks as global air travel demand declined significantly and multiple airlines were forced to temporarily (and some permanently) shut down. There will soon be clear winners and losers in Europe, where the airline industry contains a few less-than prepared airlines and hasn’t seen consolidation the way the US has seen it over the past decade. US airlines emerged from the Financial Crisis stronger, better capitalized and less leveraged than pre-crisis. Still, the current demand environment is stress testing all airlines no matter docile. The team at Ishka highlights the below charts showing liquidity positioning, as of December 2019, for various airlines. On the whole, US airlines have better balance sheets and airlines with relatively strong credit positions are mostly clustered in Europe and North America. 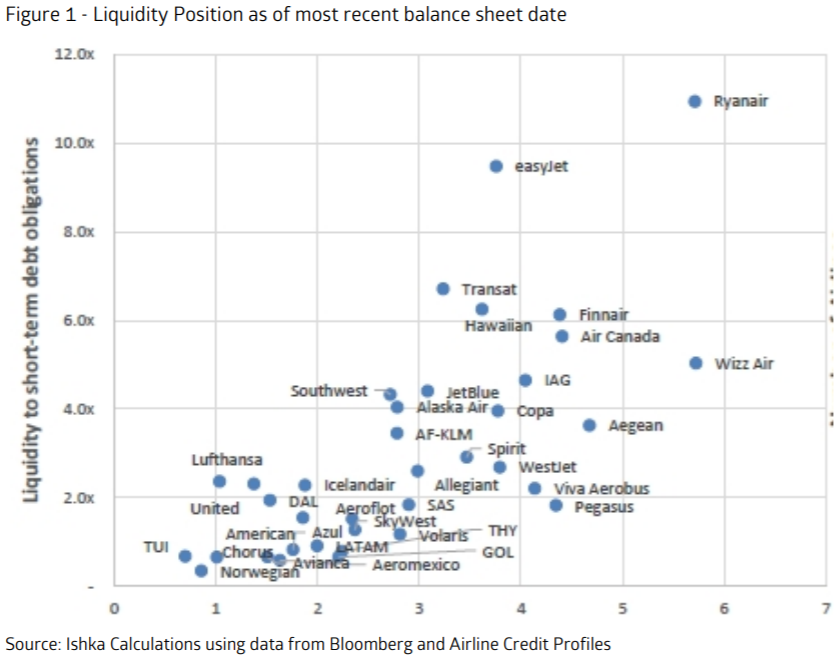 Many investors are now focused on how long airlines can stay afloat in a zero, or close to, revenue period. The majority of US and European airlines have the liquidity to short-term debt obligations of between 0.0x and 5.0x and have enough liquidity to cover one to four months of revenue at current liquidity levels. Note this doesn’t include capital raised in the past few weeks.

Aircraft Valuation in this Unique Environment

Last year was definitely not a “normal” year for airlines or aircraft lessors as delivery delays at Airbus and the MAX grounding at Boeing caused fewer aircraft to be delivered than expected. Since the situation is unlikely to change this year that’s probably a good thing. Delays at Airbus and prolonged MAX grounding have put a damper on fleet growth plans; However, the fall in demand left airlines needing fewer planes in the sky, not more. In addition to company liquidity, aircraft liquidity continues to be important for aircraft valuation. Ishka estimates 737-MAXes, A320-200neos, and A321-200neos are expected to increase in liquidity while 737-800s, A320-200s, 777-300ERs, A330-200s, and A319-100s are forecast to decline.

The coronavirus has caused many airlines to park aircraft in an effort to save money. Parking can skew aircraft value due to the increased cost and time required to get an aircraft back into the air. Those aircraft which are in long-term storage should expect to see a lower valuation than those in short-term storage.